dror/forshée is the working name of Hagit Dror and William Forshée. Together they form a creative team with an extensive background in fine art and commercial photography. They have been working with each other since 2004.

Born in Jerusalem in 1976, Hagit Dror began using a camera and darkroom at an early age. She continued as a military photographer for the IDF where she was trained in the highest technical standards of photography. In 1996 she moved to NYC to pursue photography professionally and continued her studies independently through the New School. Working with many photographers to support herself broadened her photographic knowledge and deeply refined her skill. Hagit has had 3 solo exhibitions and has participated in several group shows including the most recent group show of the NJSCA Fellowship Exhibit in 2018. She has more than 20 years of experience in darkroom, film and digital photography and currently prints all of her silver gelatin work she exhibits.

William Forshée was born in 1970 in Minnesota. He has been using the mediums of drawing and painting almost his entire life. He worked as a graphic designer while finishing his BFA. In 1997 he moved to Minneapolis where he was hired as an illustrator to create detailed illustrations and manipulate photography for a heavy machinery corporation. Taking advantage of continued education through the company allowed him to work with some of the most advanced equipment of the time. In 2000, he moved to NYC where he worked for fashion magazines, and advertising agencies creating sophisticated photo manipulations and photo illustrations for a broad range of high profile clients. 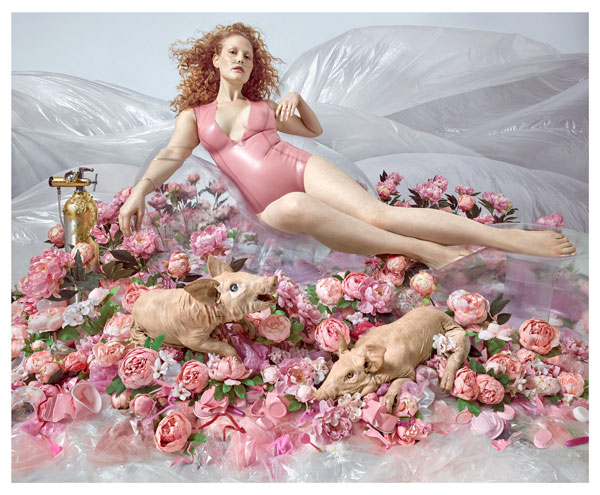 Inspired by Baroque and Rococo paintings, and their portrayal of classical mythology, Gaia is depicted here as a voluptuous, plastic winged goddess. Her gaze is questioning as she reclines in a flowery plastic garbage patch. Two slaughtered pigs attend to her like cherubim. They are both sacrificial and symbolic of our voracious appetite. Pastel colored trash flows out toward the viewer like a plastic waste tide washing ashore. Gaia is a playful yet grave reminder of our addiction to plastic, and the consequences we face, in a beautiful polluted display.