Franc Palaia is a multi-media artist who works as a photographer, painter, sculptor, muralist, book artist, musician and is an independent curator and lecturer. Exhibitions include 350 group shows and over 40 solo shows regionally, nationally and internationally. He has been awarded 21 grants and fellowships in 6 media categories and they include the Rome Prize, Louis Tiffany grant, two Polaroid Sponsorships, the Painted Bride grant, a Puffin Grant, several NYFA grants and two New Jersey State Council grants among others.

Some group shows include the Metropolitan Museum of Art, the Whitney Museum annex, and the Museum of Contemporary Art in L.A. to name a few. Group shows include Vassar College, Gabrielle Bryers gallery, OK Harris gallery, PS1, the New Museum, the Clocktower, Rutgers Univ., Newark Museum, Montclair Museum, Princeton Art museum, Alternative Museum, Center for Photography in Woodstock and others.

He has curated 45 exhibitions in photography and sculpture in the US and in Italy. Public Collections include the Museum of Modern Art, Newark Museum, Brooklyn Museum, NJ State Museum, Fundacio Salvador Dali in Spain, American Academy in Rome, Prudential Ins. among others.

Private collections include Diana Ross, Richard Ekstract, Peter R. Stern, Billy Name, to name a few. He has painted dozens of murals in tri-state area with several appearing in Hollywood movies, WNBC TV and the Discovery Channel. Many of his urban street photos have been featured in documentary films such as “Shadowman” and “Boom for Real” both screened at the Tribaca Film Festival in NYC. Franc was named “Distinguished Alumni” in 2012 from Kean University. 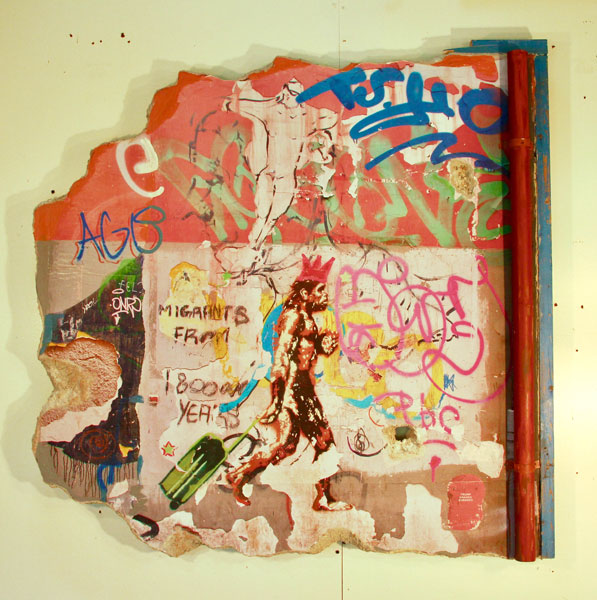 The image for this piece is from Naples, Italy, an archival color photograph with paint, wood, collage, faux cement on Polystyrene. It looks convincing, like a slab of an urban wall ripped out of a building but everything is simulated.