She has also exhibited internationally in shows in France and Luxembourg, and in 2017  was selected as a finalist for the  Luxembourg Art Prize, and included in a group show of the Laureates. In 2019 she joined the Marloe Gallery, which broadened her American audience, showing her work in art fairs across the country in cities such as San Francisco,  Seattle, Houston, and most recently at the Aqua Art Fair in Miami.

Her work is held in numerous private collections across the US and Europe, and has been written about in the New York Times, Jersey Journal, and a variety of online publications including Zone One Arts. She currently lives in Jersey City with her husband and three children, and works in her studio at Mana Contemporary, also in Jersey City. 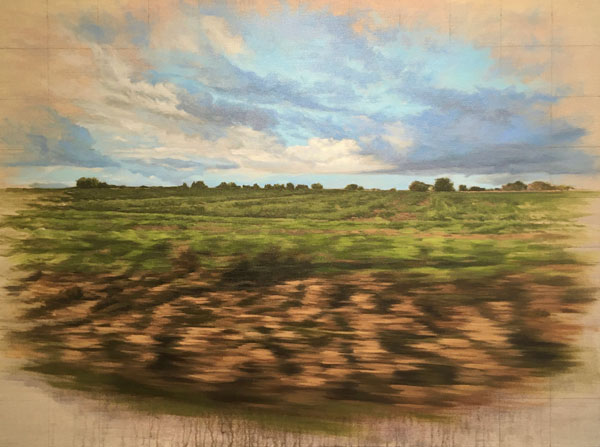 Afternoon Delight shares its title with the Starland Vocal Band’s innuendo filled hit song from 1976. I gave it this  title because it does perfectly describe the painting; a landscape with delightful afternoon light, but I also wanted the viewer to consider that the subject of a painting isn’t necessarily the content of the work. That the painting isn’t about  the place, but more about an experience of the senses and emotions, a memory of a state of mind, a savoring of the  beauty of a fleeting moment, a lust for life!