New Jersey native Joel Simpson has been photographing since 1960. He went pro in 2002 and has participated in many group shows both in the US and in Europe since then, as well as solo shows in New York, Paris, New Britain, New Jersey, Texas and elsewhere.

His work has appeared in numerous publications, both in the US and abroad, including articles in Silvershotz (Australia), Focus (online, New York), and Natural History Magazine. Last year he published a 168-page coffee table book of worldwide geological photography, “Earthforms: Intimate Portraits of Our Planet.”

His photographic interests include archeology, social documentary, surrealism, and botanicals, in addition to his main focus, landscape and geology, with a predilection for abstract forms in nature.

Simpson has a PhD in comparative literature from Brown and has taught English, French and Italian at the college level. He is also a jazz pianist. 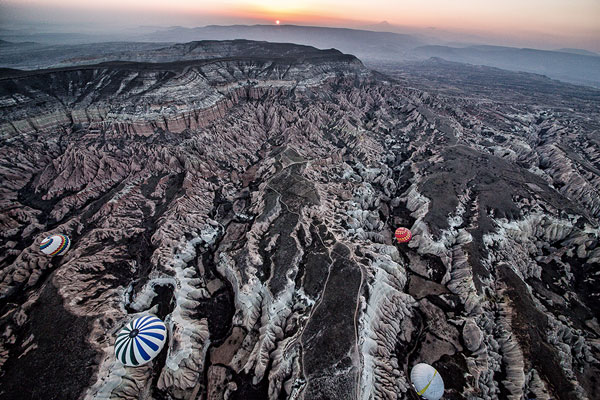 Sunrise over Cappadocia
Joel Simpson
photography on aluminum
20 x 30 in.

The volcanic terrain of Cappadocia, Turkey, is famous for its tent rocks, fairy chimneys and a variety of fascinating forms. The hot-air balloon ride that begins before dawn affords a breathtaking overview. This image was captured with a super-wide angle 12mm lens.