Artist Kazaan Viveiros recently relocated to Frenchtown, NJ from the Washington, D.C. area. She earned a BA with distinction from the University of Virginia and an MFA from the San Francisco Art Institute. She has since exhibited work in solo and group exhibitions in the U.S. and Europe, including solo shows in New York, San Francisco, Berkeley, Scottsdale, AZ, and Richmond, VA. In 2003, curator Raffaella Guidobono gave Viveiros a show at TAD Concept Store in Rome.

Viveiros’s paintings have been collected by a wide array of corporations, including eBay and Capital One Bank, as well as by individuals such as Wal-Mart’s Rob Walton and novelist Danielle Steel. Summit Medical Group MD Anderson Cancer Center in Florham Park, NJ has many of her works in their collection. In addition, five of Viveiros’s paintings were purchased by the Art in Embassies Program and are permanently installed in the U.S. Embassy in Addis Ababa, Ethiopia. 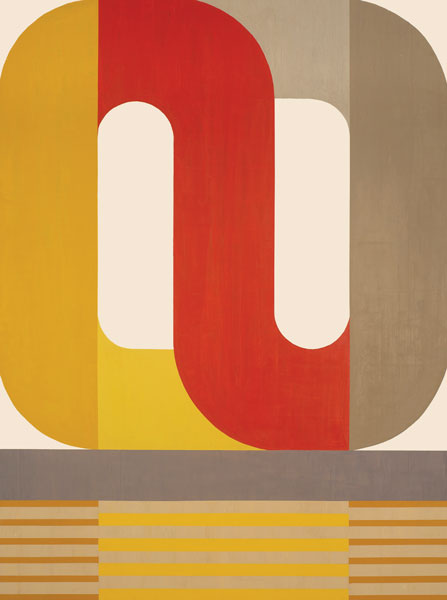 Using the language of geometry within a narrow framework, this work explores concepts of mechanics, natural phenomenon, ecology, and natural and designed systems. The forms within reference a varied list of sources — the path of sunlight, shifting power dynamics, the concept of infinity and perpetual motion. The composition remains esoteric, firmly planted in abstraction. The external world is filtered through a personal lens.