Artist, painter and collagist, Matt Gabel found and learned most of his visual language growing up in the New Jersey/New York area. Matt began his life in the suburban town of Wayne, New Jersey, where he found the most rural surroundings to always keep him connected with the outside world. Born in 1969, Gabel had spent half of his life without global internet or cellular technologies which pushed him to be more creative and observant of his surroundings. When Gabel was little, he remembers being enamored with an ordinary cardboard box. This meant days of creation in making an articulating fortress, or perhaps a mystifying dragon. Whatever it was, he loved creating something from raw material. Occasionally, he would use the painted walls in his bedroom for crayon and marker murals. Needless to say, this did not sit well with his parents, so pads were given for his creative needs. He began to draw mostly fantasy and renderings of J.R. Tolkien’s stories.

Matt Gabel’s childhood also included exploring the wooded areas near his home. He recalls wandering a nearby creek and finding crayfish and salamanders hidden under rocks for the first time. He returned to that spot for days fascinated by the creatures and objects that surrounded him, hiding right there in plain sight. For Gabel, this idea resonates in his mind today as he composes and conveys the unknown in his latest contemporary works.

After graduating from the School of Visual Arts and working in the New York area as an illustrator, Gabel moved to Florida where he continued performing art-related jobs. One job included illustrating book covers for School Book Fairs. His favorite commission was a 100th anniversary edition of H.G. Wells, The Time Machine. This was also the time when Gabel met his wife, Karen. Shortly afterward, he returned to New Jersey and continued his artistic path in New York. He was hired by Jeff Koons to work on paintings included in his “Celebration Series.”

It was a few years later that Gabel tried his hand at the fine arts. After stretching and painting some canvases, he found representation in New Jersey at Rose Royce Gallery where he sold several oil paintings. A year later, Gabel was approached to create a series of artwork of legendary sports athletes. A highlight of this time was working for HBO TVKO Boxing where he showed and sold pieces around the country at event parties.

Throughout his art years, Matt Gabel has worked as a residential painter and decorative artist embellishing people’s homes and estates. Gabel has sold paintings to private collectors and made life size murals. Always working on his canvases with earnest passion, Gabel has now found time to be creative full time. Daily, he practices and works his discipline to the limits always growing as an artist.

Today Gabel works mostly with collage that he pieces together like a puzzle creating a inlaid montage, or solid, cohesive image. He creates these images from pieces of paper or canvas that are painted with his mixed media techniques. These pieces are color- categorized for convenience, layout and finishing phases of his work. Occasionally, Gabel will keep a piece that has been painted usually turning it into a unique portrait or a conceptual, figurative work. He believes these might be recordings of people or souls he has met throughout his journeys. There have always been ups and downs in Matt’s career. “It is extremely challenging carrying on day to day as an artist. One has to make changes almost daily to stay sustainable, relevant, and sane,” Gabel explains. 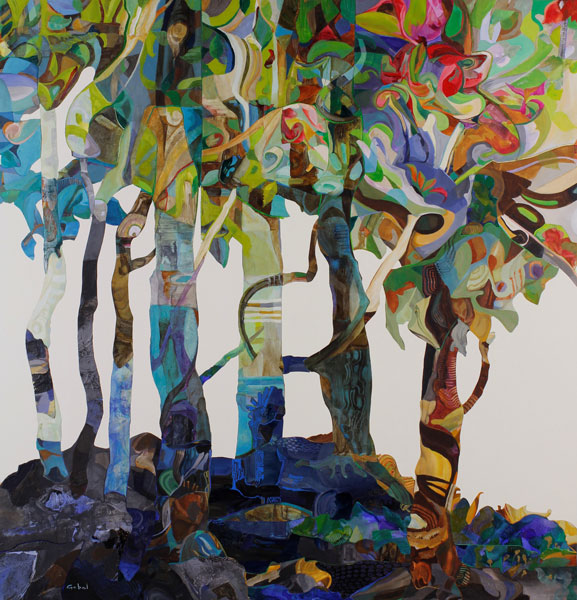 My work is mixed media collage. I begin my process by painting on acid free papers and canvases. These paintings are fashioned in an abstract genre. I color categorize them and they act as my color palette in my next phases of work. The mediums used consist of oils, acrylics, watercolors, ink, crayon, enamels and metallics. The creation of my image on wood panel is the next step. I begin cutting and dismantling the abstracts to create my contemporary, figurative and landscape works. I use a process of inlaying the paper and canvas to make one cohesive, puzzle-like image. The completed art is then varnished and framed for hanging.