Lay has received two grants in sculpture from the New Jersey State Council on the Arts and a grant from the American Scandinavian Foundation. She has been awarded three public art commissions including the installation of a large-scale site-specific sculpture in the sculpture park at the Henie-Onstad Kunstsenter in Oslo, Norway.

Solo exhibitions of her work have been presented at Aljira, A Center for Contemporary Art, the Jersey City Museum; New Jersey State Museum; and Douglass College, Rutgers University. Work has been included in group exhibitions in Japan, Austria, Korea, China, Norway, Wales and Slovakia and at the Jersey City Museum, Newark Museum, New Jersey State Museum, The Jane Voorhees Zimmerli Art Museum, Montclair Art Museum, The Aldrich Museum of Contemporary Art, Everson Museum, and the 1975 Biennial Exhibition at the Whitney Museum of American Art. Lay’s work is featured in a number of books including Lives and Works, Talks With Women Artists, Volume II by J. Arbeiter, B. Smith, S. Swenson.

Pat Lay, born and raised in Milford, Connecticut; has been a professional artist since 1968; lived in SOHO, NYC for twelve years and has been living and working in Jersey City, NJ since 1981. A graduate of Pratt Institute and Rochester Institute of Technology, Lay is a retired Professor of Art, Montclair State University. 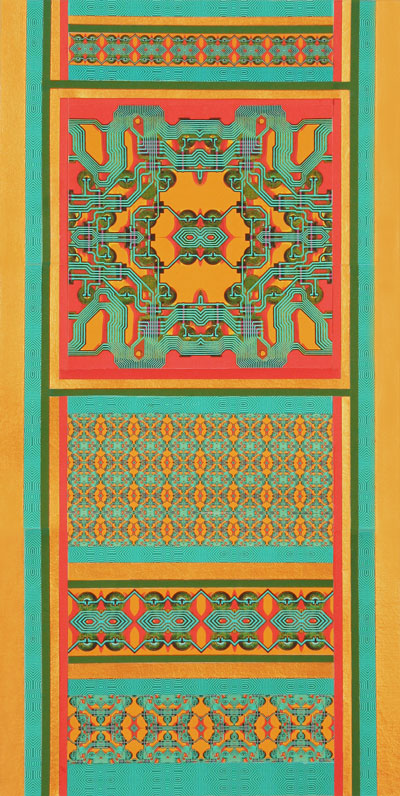 In this series of collages, 96 × 48 inches, the scroll format is used to give the works the presence of a thangka, an object for contemplation. Digital images scanned from computer circuit boards are printed on Japanese kozo paper and then collaged into patterns that transform them into a new matrix. A place, created in response to our world of technological advancements and digital progress. These works continue to question and critique the paradoxical relationship between man and technology. I have taken a religious icon, the Tibetan thangka, and have transformed it into a contemporary icon that speaks to our obsession with technology.