As a child of the 80s, born to a Cherokee and African-American mother and a Trinidadian and British father, Robinson is deeply influenced by the narrative of identity and that which makes the most impact on identity, specifically race/ethnicity, popular culture, and the universalities that bind us together.

Robinson’s sculptures address notions of temporality by using wood that has been dated. Using dendrochronology, he grounds his work within the ongoing timeline, while creating tangible objects through which one is able to contextualize and explore culture and human connectivity. Robinson sculpts images of cultural significance. He sculpts images of importance. He takes this work as his own, seeking to address the schism between the self and the world.   Robinson connects marginalized culture to hegemonic culture and defines it, not only for himself, but for those who need a witness. Robinson’s work celebrates the vital connection between lived experience and cultural and historic discourse.

“Another fashion house has gotten it outrageously wrong. There is no excuse nor apology that can erase this kind of insult.” 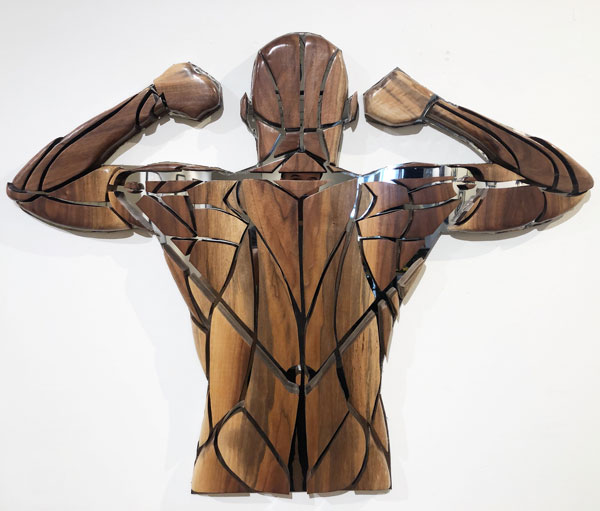 What has Been can Never be UnDone: Part III (Prada)
Philip A. Robinson Jr
walnut, 18 gage mirror grade stainless steel sheet metal
42 × 36 in.

The sculptures What has Been can Never be UnDone: Parts I, II & III are in response to the protests of Gucci, Moncler, and Prada prompted by a social media post that went viral.

The Power House of Gucci went under immediate outrage after they revealed a new clothing line resembling ‘Blackface.’: A Gucci knit top with a black pull-up neck and grotesque red-lip caricature.

“I am a Black Man before I am a Brand”

French sport label Moncler was forced to issue an apology for their latest collection which took inspiration from the face of a 19th century ‘golliwog doll.’ These controversial toys known for their black skin, clown lips, and frizzy hair are widely censured due to their offensive racist undertones. The Brand is now using the doll’s infamous white-rimmed eyes and red lips on their new collections of sweaters, t-shirts and accessories.

“Another fashion house house has gotten it outrageously wrong. There is no excuse nor apology that can erase this kind of insult.”